How to Trim Dog Nails

Many people find the task of trimming a dog’s nails intimidating. The nail contains both a blood vessel (the “quick”) and a nerve that can lead to bleeding and pain if the nail is cut too short. Yet nail trims are very important for the comfort and health of the pet. This grooming task is something that can be learned and performed at home.

Anatomy of a Nail

The toenail is composed of two major parts – the quick, the blood supply and nerve that nourish the nail, and the horn-like nail tself. Just like human nails, dogs do not have any feeling in the nail itself, but the quick contains a nerve that transmits sensations back to the brain. When trimming the nail, it is important to stay far enough from the quick to avoid causing pain or drawing blood.

Dog nail trimmers come in two main styles: scissor style and guillotine style. For most people, the scissor style trimmers are easier to use. In addition, you should have styptic powder on hand in case you trim too deeply. 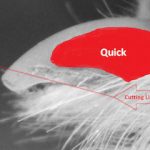 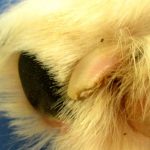 The first uncut nail – notice where the pink quick ends. 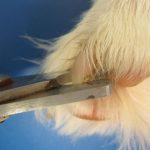 Correct placement of the nail trimmers – notice that they are cutting past the end of the quick to avoid drawing blood or causing pain. 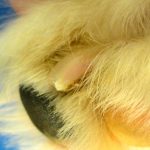 The nail after the first trimming.

White and tan colored nails are considered by many to be easier to trim. If you have a dog with white feet and white nails, consider yourself lucky! In younger dogs with white nails, the quick is generally easy to see from the side of the nail. Trim a little at a time, looking both at the side of the nail and at the cut surface. In white nails, the cut surface will turn pink just before reaching the quick. This is where you should stop. See the slide show below to see the correct placement of the clippers and what the nail should look like when trimmed correctly.

The nail after the first trimming. 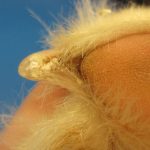 The cut surface of the nail after the first trimming. Look at the center of the nail – it is white (not pink) and flaky, indicating the nail could be trimmed a little closer. 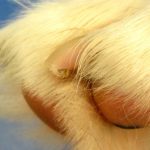 The nail after trimming another millimeter off.

Black nails are a little more challenging because the quick is not clearly visible from the side. If you happen to have a young dog with hooked nails, you can safely trim off the hook, essentially making the nail flat across the bottom, without risk of hitting the quick (see the first photo in this article to see the correct cutting line). If your dog doesn’t have hooked nails, you need to pay very close attention to the cut surface of the nail to know when you’ve trimmed close enough. Initially, the cut surface will show a white or gray center, but as you get closer to the quick, this center will turn black and eventually pink immediately before reaching the quick. Take of just a tiny bit of nail at a time to see this change, and stop when the cut surface shows a solid black center. See the slide show below to see how to trim black nails. 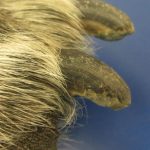 Another uncut nail. This nail shows a nice hooked tip that can be trimmed off without impacting the quick. 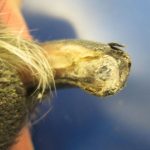 Now the cut surface shows a little pink at the center. This indicates the quick is very near and the nail should not be trimmed further.

The second nail’s cut surface after trimming. The dark pink center indicates the cut was quite near the quick and no further trimming is needed.

At some point, you will trim the nail too deeply, causing your dog to flinch and the nail to bleed. Don’t panic! Even people who trim nails every day make this mistake periodically. The best way to stop the bleeding is to apply styptic powder to the cut surface. This helps clot the bleeding much faster than pressure alone. If you don’t have styptic powder on hand, corn starch or flour will work as well, just not as efficiently. If the nail will not stop bleeding, you can apply a little ice to slow it down before re-applying the powder. Rarely is any other treatment needed.

If you feel unsure about trimming your dog’s nails, talk to your veterinarian or groomer. They would be happy to demonstrate the correct procedure and coach you as you try it out the first time.

ARE YOU LOOKING FOR A REWARDING CAREER? WE ARE HIRING!

ARE YOU LOOKING FOR A REWARDING CAREER? WE ARE HIRING!