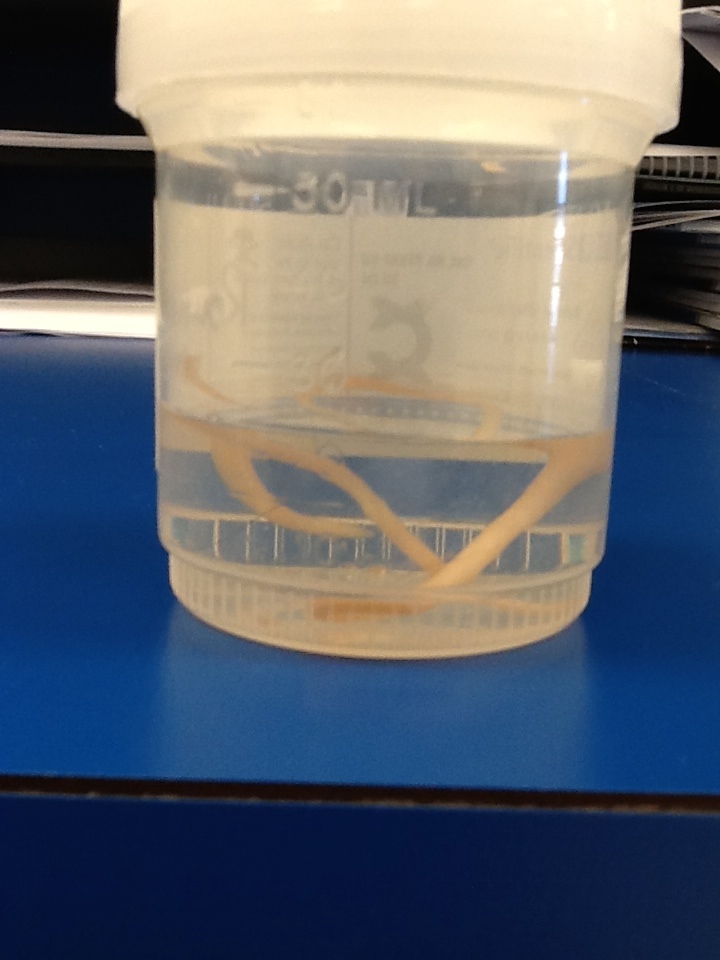 Roundworms are one of the most common intestinal parasites found in dogs and cats. They are so common, in fact, that all puppies and kittens should be routinely dewormed early in life. Roundworms are large worms that are easily seen with the naked eye. They look like spaghetti noodles and may pass live in an infected animal’s stool. Roundworms may be seen in the stool, passed directly from the anus, or may be vomited.

There are two primary ways an animal can be infected with roundworms. Puppies and kittens are most often infected while nursing. The larval worm from the dam passes through the mammary gland and into the milk and is ingested by the baby. Puppies and kittens as well as adult animals can also be infected by ingesting the microscopic egg of the roundworm. These eggs are passed in the stool of infected animals. Dogs and cats can pick up these eggs from contaminated soil or by eating the stool of other animals.

Roundworms are a zoonotic disease, meaning people can also be infected.

Roundworms are a zoonotic disease, meaning people can also be infected. Infection occurs when the eggs of the worm are ingested by the person after digging in contaminated soil or cleaning up after an infected pet. Humans are not the normal host for these worms, but they can cause severe illness by migrating through the internal organs, most commonly the liver and the eye. Toxocariasis, as the disease is called in humans, is one of the leading causes of blindness in children. Thorough hand-washing after outdoor activities or handling a pet’s feces will prevent transmission.

The life cycle of a roundworm takes approximately four-six weeks to complete.

A diagnosis of roundworm infection is made by fecal floatation or by visualizing the adult worm in stool or vomit. Treatment is usually effective and straightforward. Treatment generally consists of a general dewormer and environmental cleaning. Indoors, the floor should be vacuumed and cleaned with an all-purpose cleaner. Litter boxes and bedding should be scrubbed and laundered. All animals in the house should be dewormed together to ensure all infected animals are treated. All stool should be removed from outdoor areas, and care should be taken to avoid visiting areas where large numbers of animals visit, as soil in these environments may harbor parasite eggs for many years.

Thankfully, prevention is easy. Most monthly heartworm preventions for dogs and cats also protect against roundworm infection. These products work by eliminating any parasites the animal has contracted within the last 30 days, so it is important to use them regularly year-round for full protection. Animals who have not been on routine heartworm prevention can be dewormed with a general dewormer. Annual or bi-annual fecal floatation testing should also be performed to ensure no failure of preventative medications.